A Storage Philosophy for Garages, Closets, and Hard Drives 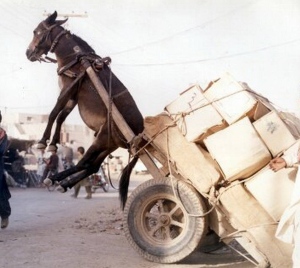 Step into my garage, my office, my shed, or my closet, and you’ll quickly discover that those four simple words are the guiding philosophy of most of my life and all of the spaces I occupy.

Those four words are the reason I’m convinced that the best rental property imaginable these days is not made up of lots and houses folks have acquired to rent to other folks to live in. No. The best rental property is not designed for human habitation at all; it’s built for people to use to store the stuff that’s about to literally bury them in the habitation in which they do live. My facility would be called “Because You Might Need That” Storage.

That popular philosophy/disease being what it is, people will clean out a garage or a spare room or an office, and then decide to rent storage space for a couple of months until they have time to go through all the junk.

A year later, of course, the stuff’s still stored, and the meter’s still running. Later still, the heirs of the original packrats will likely be on Social Security before they find time to don hazmat suits and dig through the archaeological waste accumulated by their progenitors. More than likely, they’ll then open the door, take one look at the detritus, and decide to pay the rental fee for a couple more months until they psych themselves up to tackle the mountainous mess. An eye-blink later, it’s a year later. The meter is still running.

All of this points to the fact that most of us have way too much stuff, a large percentage of which should have long ago been labelled “garbage” and relegated to a landfill. But we don’t toss it; we store it. Why? Repeat the four words.

A glance at my computer’s “desktop” will confirm that those four words also constitute my digital philosophy. I’ve got a new computer arriving in a few days, so I’ve been deleting old files and programs. I still need to find time to look through a file labelled “Old Files” that I created and moved from the computer that preceded this one five-and-a-half years ago. What I’ll probably do is start off digitally packing and tossing, and then I’ll mutter, sigh, and create a new folder called, maybe, “Old Files 2.” It’s the equivalent of packing one room at your old house, throwing up your hands, and then just letting the professional movers pack it all, trash still in your waste baskets, moving everything, garbage and all, to the new one. You can always sort through it later, right? And who knows? [Insert the four-word mantra here.]

I’ve found a program and a cable that promise to seamlessly move everything from the old machine to the new one, all settings intact. Is that a blessing or a curse? I really should make some decisions about which forty of the forty-five pictures of our five-year-old grandson’s first birthday that I keep. But, sure as the world, if I delete five, I’m afraid that I’ll wake up and realize, well, you know. So I just ordered a massive hard drive (so I can pack the trash cans, too). More storage. That’s the ticket.

No wonder Jesus warns, “Do not store up for yourselves treasures on earth, where moth and rust destroy, where old hard drives crash and new operating systems corrupt” (Matthew  6:19, mostly).

Copyright 2017 by Curtis K. Shelburne. Permission to copy without altering text or for monetary gain is hereby granted subject to inclusion of this copyright notice.